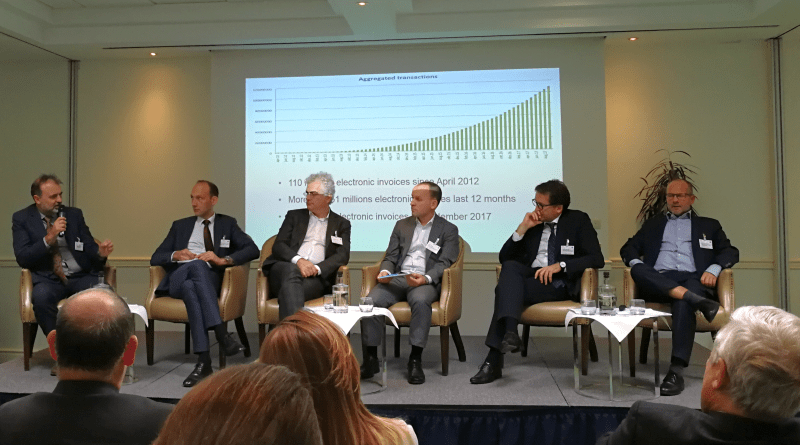 The standard for electronic invoices to contracting authorities is now almost four months old. Five Member States draw a first conclusion on the implementation status of the EN16931 at the eInvoicing Standard Launch Event of the European Commission. Although at the first glance all Member States have the same task to implement the standard, the approaches are quite different. They differ in several essential aspects:

Thus, in the Member States under consideration, so many different approaches have already been chosen that are difficult to compare in an efficiency or cost analysis.

For the Netherlands, the electronic bill to contracting authorities is not a new issue. Already since 2010, a central data hub of the administration, which receives these electronic invoices, exists. In 2016, 48% of all invoices (of approx. 2 million) were already sent to central public clients as structured data. A further 22% as PDF files and the remaining 20% ​​were invoices on paper.

In the Netherlands, only one implementation date applies to all contracting authorities: 17 April 2019. This does not make use of the option to provide the decentralized contracting authorities another year for implementation. Nevertheless, there are different requirements for central and decentralized clients. There are three ways to reach the centralized processing center: a central data hub of the administration, a web portal, and a PEPPOL-based network for B2B and B2G. Even though the Netherlands will accept the standards in UN / CEFACT CII, they prefer the syntax UBL 2.1.

A centralized solution for the decentralized customers is at the same time countering this central access of the central contracting authorities. In a separate co-ordination project PIANOo these clients and the solution providers are made fit for their suppliers to connect to the Simplerinvoicing network.

Unlike in some other countries, there should be no legal obligation for the broadcasters to send electronic invoices. However, as of 1 January 2017, the central contracting authorities have been obliged to include electronic invoicing in new tenders and contracts.

Administration and business are currently working on a common CIUS for the B2B and B2G exchanges of electronic invoices. It is also planned to allow only a limited number of extensions to EN16931.

With the platform CHORUS Pro, France has already set up a central reception solution for contracting authorities at an early stage. Invoices can be accepted in this platform in many different ways. In addition to a web portal and a connection to PEPPOL, CHORUS Pro is particularly focused on the direct connection of ERP systems. Apart from purely structured data for UBL and CII, it also includes hybrid invoices in the format Factur-X. From the combination of legible PDF files with embedded structured data, France promises faster and easier implementation of electronic invoices in the market.

France has developed its own CIUS for sending the invoices to CHORUS Pro. In particular, cross-border invoicing sends recommendations on how the codelists contained in EN16931 are restricted. It also defines which references must be transmitted in order to ensure automated invoice processing. However, France also introduces implementation possibilities that go beyond CIUS and are therefore not compliant with EN16931. This makes it possible, in particular for the smallest companies, to send only a few mandatory information together with the hybrid invoice. In this case, the invoice items are not transferred in a structured manner, whereby the PDF file becomes the actual invoice document.

And this is also necessary, because in France, the watch is already ticking today. The goal is to send only B2G electronic invoices as of 1 January 2010. But so long, only a few of the 1.25 million companies in France have their implementation time. As of January 1, 2017, the largest companies were legally obliged to send invoices to the administration exclusively via the portal. This obligation shall be paid annually on 1.1. to the next group of smaller companies. By 2020, some 95 million invoices are to be sent electronically to the public authorities every year.

With a legal introduction in 2005, Sweden is regarded as the pioneer of electronic invoicing in Europe. In these 12 years it has been achieved that about 60% of all invoices are sent electronically. While all central contractors already support the reception and processing, around 87% of the decentralized customers still have a little maintenance reserve.

Sweden uses the PEPPOL network exclusively as a syntax for the exchange of accounts. Sweden does not develop its own CIUS, but instead focuses on the CIUS for PEPPOL BIS developed within the PEPPOL project. The legislation provides for an obligation to send electronic invoices B2G to all contracting authorities on a single deadline. This legislation is supported by a number of other objectives and projects to further enhance the benefits of electronic invoicing. Sweden already has an integrated e-procurement system. Tenders and orders are also made electronically so that the different exchange formats intersect one another. This is supplemented by change management projects, which are designed to help companies and decentralized clients meet the requirements.

A central network serves as an interface between the approximately 2 million accountants to the 24,000 public contracting authorities. In the future, this central platform will also be used to implement the two syntaxes of EN16931 and thus create a link to the national format. In addition to the invoice, orders and despatch adivces are already sent via the PEPPOL-based network in Italy.

Italy takes a pragmatic approach to CIUS: a distinction is made between the rules on national exchange of accounts and cross-border exchanges. In order to be able to continue to make optimum use of the already established systems, the requirements for national invoicing are higher than for the cross-border exchange. In the case of the latter, only a few elements are defined which, in particular, serve to allocate incoming invoices for further processing.

In addition to Sweden, Norway is also a pioneer of electronic invoicing in Europe. Since mid-2011, public administration and health care have been prepared to receive invoices and credits electronically. In mid-2012, the obligation to include the electronic data exchange in all new contracts came into force.

Norway also relies on the PEPPOL network as an access point for electronic invoices. However, the requirements for national accounting differ from the cross-border calculation. While the latter is using the PEPPOL BIS format, Norway has developed the EHF format based on it on the same basis for the national exchange.

This combination is also retained in the implementation of EN16931. No additional CIUS is developed, but the network’s requirements are familiar.

Since the introduction in 2012, about 110 million electronic invoices have been shipped, with the use of a large number of them increasing. About half of all invoices were received in the last 12 months, and 5.2 million of them alone in September 2017.

Conclusion on the implementation status

The standard reduced the number of syntaxes to two. It also ensures that invoices which conform to the standard must be accepted by all contracting authorities. This first reduces the complexity of the implementation.

However, the five countries represented partly pursue very different approaches to establishing electronic invoicing in the respective country. This can continue to challenge billers who continue to send their goods and services to several countries. In particular, the distinction of whether invoices are sent nationally or cross-borderly means at least two different implementations for the billers. But the real challenge lies in the many different ways to get an electronic invoice.